How to cut laminate - sawing laminate

In recent years, among all floor coverings, it is laminate that steadily holds high positions in popularity. This is understandable, because the laminated board is very similar to wood, although it is made on the basis of fiberboard of increased density. The design of the laminate is four-layer, and on the surface there is another layer in the form of a film, its purpose is decorative and protective. Laminate is quite simple to install. Like the absolute majority of floor coverings, laminate needs cutting and fitting to the dimensions of the room, and this is where the beginner may have problems, because it is not known how to cut the laminate so that the cut would be without the slightest cracks and chips. 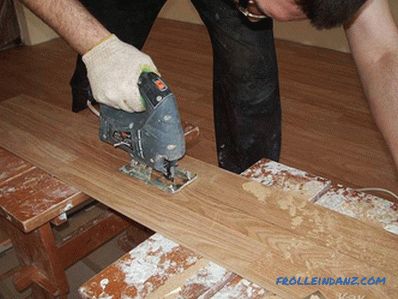 Jigsaw is one of the most convenient materials for sawing laminate. Cutting should be carried out at increased tool speeds to reduce the possibility of deformation of the laminated board.

In order to do everything right, you must first prepare for the cut. To do this, from the outside mark the pencil line, along which the cutting will be carried out. Now you need to hold the same line with a sharp object, such as a knife or an awl, and make some effort. This will allow to cut through the upper protective layer, which will further help to create a more even and clear cut line of the board.

Now you need to place the board on a flat surface and fix it thoroughly. The part of the board that will be sawn should be in limbo. Actually, now you can begin to cut. 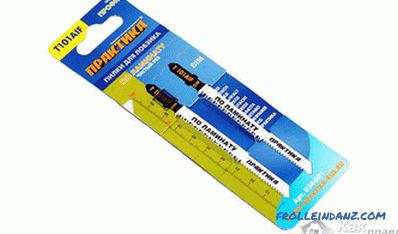 You should also determine which file is best to use. Today there are nozzles for wood, including special ones for laminate.

If it is necessary to make straight sections, the file may be wide, although for more complex cuts, it is better to use a file with small teeth and a narrow blade. The narrowness of the canvas especially affects the beauty of curly cuts, and the narrower the canvas, the more subtle and neat the cut will be.

Also recently saws with a reverse orientation of the teeth appeared on the market, which perfectly copes with the task of carefully cutting the laminate. 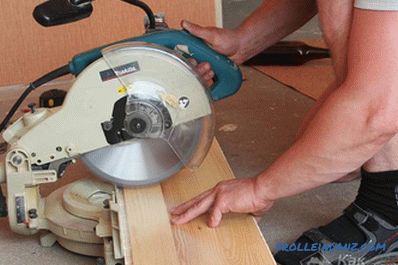 The circular saw cannot be called optimal for cutting laminate, but if a person has certain skills to work with it, then he should have no difficulties. Most often, this method is used when you need to cut the laminate along, that is, when you need to go through the entire length of the board. Circular saw allows you to significantly speed up the process of cutting and get quality material of the required size.

The disadvantages include the formation of the smell of burnt wood. Saw should be with fine teeth. 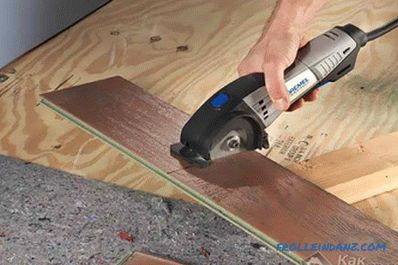 When using an angle grinder for cutting laminate need to pick up discs for concrete or ceramic tile. Cutting is carried out on the outer, front side to avoid the formation of burrs and chips.

When using the grinder, a lot of dust and burning is formed, and therefore it is necessary to protect the objects in the room, having previously covered them with a film.

Using a handsaw to cut the laminate 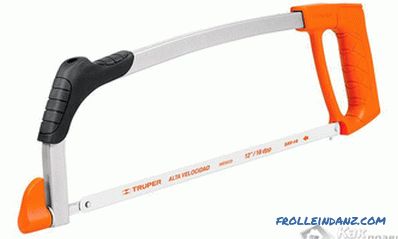 Hacksaw clearly does not lead in the ranking, the better to cut laminate, but sometimes the person at hand only has it. The classic hacksaw has very large teeth, and with their help it will not be possible to cut the board beautifully enough.

For a good cut, a hacksaw with fine teeth is required. 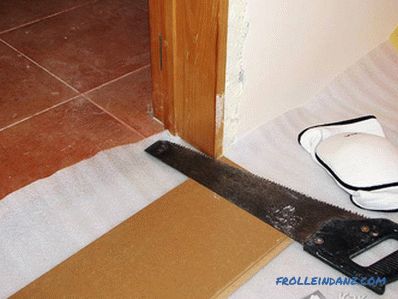 The time consuming process can be attributed to the obvious disadvantages. The use of a hacksaw can be justified if it is necessary to cut a small angle or make a cut across the board. Using a hacksaw for cutting the laminated board along the entire length is a catastrophic loss of time. 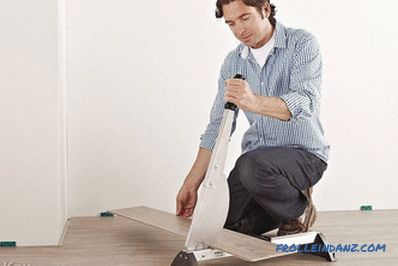 This tool operates according to the guillotine principle, there are parts of it that clamp the building material, which needs to be cut, and then is quickly cut off due to pressure. The cut is very smooth. In addition, when using the cutter, there is no noise, and it does not form dust.

The design of the cutter is such that they can only make cross-cuts, which significantly reduces its area of ​​application, and therefore the cutter should not be bought for a single laying of the laminate.

In some cases, for example, when a laminated board meets the pipes, it is required to make a cut of a certain shape, which is called figured.Theoretically, such a cut can be done with a hacksaw or a circular saw, although the jigsaw is the generally recognized leader in ease of use.

Laying laminate with your own hands

Felling of a sauna on the basis of wood: instruction (video and photo) 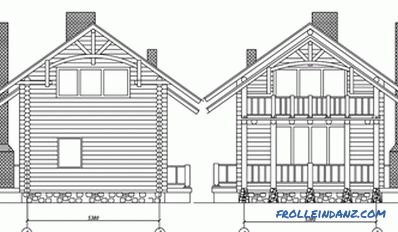 Different materials are used for self-construction of the sauna room. Their choice is most often caused by their own desire, which does not go against the available material means. The most popular...

How to glaze a balcony with your own hands 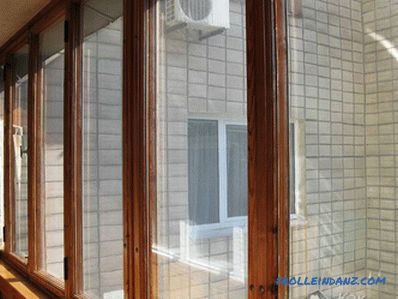 Almost every apartment has its own balcony. And this room serves everyone for different purposes: often some make it a warehouse for all unnecessary things in the house that do not fit in the closet...

Which professional sheet is better for the fence 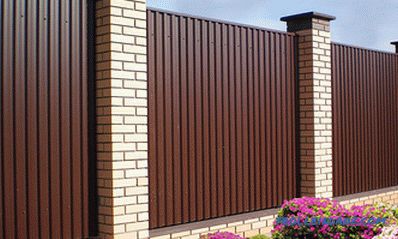 Profiled sheeting fences are not only a fashionable hobby, but also a practical and cost-effective way to protect your site or industrial zone not only by outlining the perimeter, but also by creati...

How to make a waterproofing foundation + video

House building works require a huge investment of strength, finances and maximum responsibility. The main stage of construction work is the installation of the foundation. In order for the foundat... 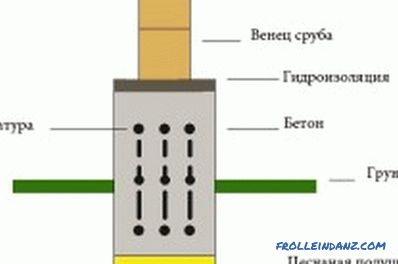