Visor over the porch with their own hands

Among the attributes of the design of facades of residential buildings, special attention is paid to the porch, which is located at the entrance to the house and primarily characterizes the taste of its owner. According to the generally accepted opinion, the porch, devoid of a visor, creates the impression of incomplete work on the design of the facade. In addition, not many will like the prospect of opening the door in bad weather in the pouring rain, for example.

In addition to the above arguments, the need for a visor above the entrance door is also explained by the reasons for the aesthetic plan. It should be added that anyone (with the experience of relevant work, as well as the ability to handle the simplest tool) can easily build a visor over the porch with his own hands. 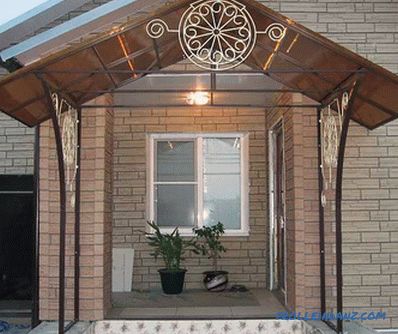 In practice, there are several types of protective visors, differing not only in the material used, but also in its form. The most common are the following options: 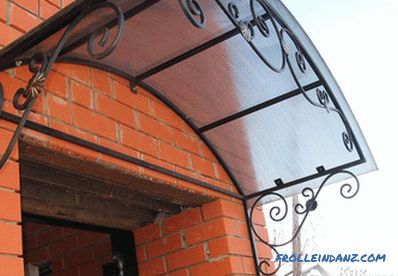 According to the mounting method, all known visors are divided into structures mounted on special supports and on hanging structures that can be fixed directly on the wall with the help of special brackets.

Before starting work, you must first select the material for the future visor, as well as prepare its sketch taking into account the material already selected and the climate in your region. In this case, most often in the conditions of central Russia, for the manufacture of these protective devices, wood is selected, which is easily amenable to decorative processing, which allows decorating the canopy of the visor with exquisite carvings. 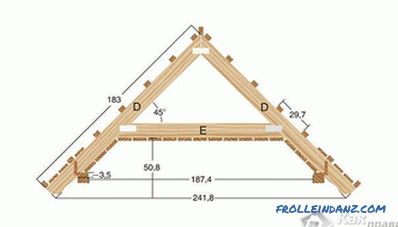 As the roofing covering, it is most often used metal tile or other similar properties materials. If you plan to make a protective canopy in the form of an arch or a tent - to close them, it is most convenient to use tiles or to make it from polycarbonate. 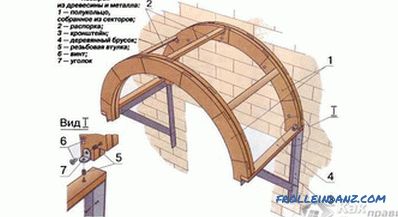 The construction of the visor begins with preparatory operations, consisting in marking the place its installation and removal of all necessary measurements. It should be borne in mind that the visor should completely block the porch over the entire area and even slightly protrude beyond its borders. This reserve will allow you to almost completely protect your porch from the rain in strong winds. 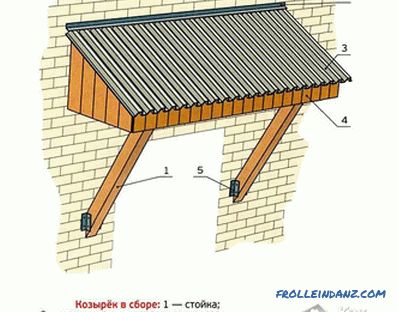 Construction of a single-sided visor

When the measurements are completed, a sketch of the future product is prepared on a piece of paper with all its size. Such a sketch will help you decide on the amount of materials required for the manufacture of the visor and which you need to purchase. In these calculations, the slope of the slopes and their total length should be taken into account. Before starting work, in addition to boards and boards, necessary for arranging the battens and rafters, special triangular brackets are prepared, and roofing material is purchased.

The procedure for manufacturing a wooden structure

The construction of a wooden canopy begins with the manufacture of several rafter squares formed by two beams, fastened together at an angle of 45 ° or 60 ° (depending on the width of square). 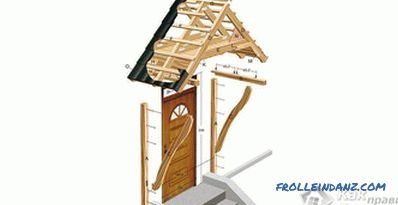 Drawing of a gable visor on a wooden frame

After that, a double-slope roofing structure is assembled from the squares; using two longitudinal beams, a ridge and a system of struts. The resulting structure should be securely fixed in the marked place of the wall on the pre-mounted metal brackets, repeating the shape of the squares.

As additional supports, two vertical beams with booms are used, which are rigidly fixed on the wall of the facade on the sides of the porch. Note that before the final fastening of the structure, it is necessary to check the horizontal position of the structure, as well as the vertical position of the installation of additional support beams. It is clear that all of the above refers to the installation of the suspension type visor.

If you choose the option of a protective visor with separate supports, you do not need to use special metal brackets.

In this case, special pillars, made of wood or metal and installed in previously prepared pit, act as supporting elements.Before installing them, a mixture of rubble and sand is poured at the bottom of the pits, after which the base of the pole supports is concreted to the full depth of the pit. Carrier beams with a rafter system mounted on them are attached to the upper part of the support pillars (i.e., the entire structure prepared earlier). For a wooden porch, two pairs of truss legs are enough, which are additionally connected by bolts to increase the rigidity of the structure.

After that, the crate is laid on the already mounted rafters (for its production thin blocks, sheets of thick waterproof plywood or boards can be used.

Hem the visor and make a sheathing

A roofing material is laid over the sheathing The type of coverage you choose is order.

When finalizing the visor, you should worry about special hooks for fixing gutters, and also about wind slats. At the final stage of the work, the drainage elements and the protective eaves strip are mounted.

In the second part of this article, we will consider the features of manufacturing a protective visor from such a common material as polycarbonate. Its appearance produced a small revolution in the design of most types of lightweight and light-transparent structures. And, indeed, a relatively inexpensive, fairly durable and lightweight honeycomb material immediately began to be in high demand by the consumer and widely used not only in the manufacture of canopies, but also in the arrangement of greenhouses, skylights, decorative barriers, etc. 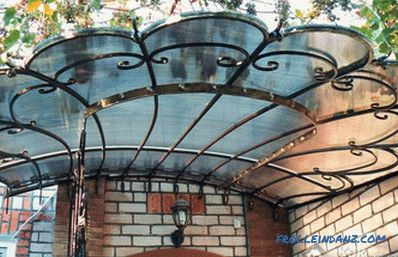 Made of metal and polycarbonate

Anyone familiar with openwork forms of polycarbonate visor above the entrance door will surely be appreciated appreciated its aesthetics and will not refuse to have a similar structure in his house. That is why we decided to help home craftsmen and acquaint them with the specifics of the choice of frame material, as well as with the fundamentals of design and practical manufacturing of such structures.

Selection of materials for the frame

When choosing a material that is best combined with polycarbonate and providing a peak possible strength, in addition to the special requirements of the SNiP, the attractiveness of its appearance should also be taken into account.

That is why, first of all, we will try to explore different types of frame material for compatibility with polycarbonate, and also try to assess the shortcomings and merits of each of them. 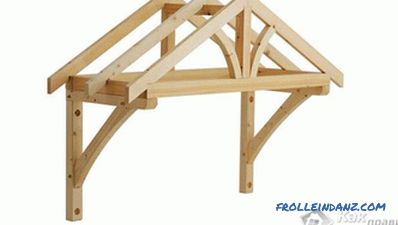 The wood frame is distinguished by simplicity of assembly and relatively low cost, but it is significantly inferior to the same metal base in terms of reliability and deadlines for operation. To eliminate this drawback, only hardwoods are recommended for this framework.

Before making such a frame, the wood should be treated several times with linseed oil like "Oxol" or similar impregnation, reliably protecting it from rotting. From an aesthetic point of view, a polycarbonate visor with such a frame fits perfectly into the facade of a wooden house, the frame of which is made of timber.

The polycarbonate sheets are attached to the frame of these types of wood using standard self-tapping screws using special thermal washers, which ensure the tightness of the attachment area and are colored to match the color of the sheet itself. 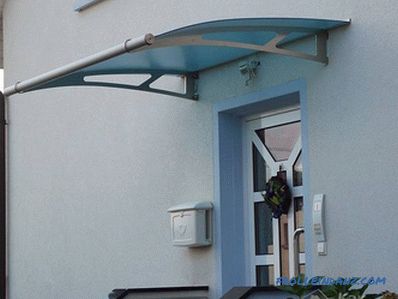 The frame on the basis of the aluminum profile is also quite light and differs in ease of installation, since for its manufacture angles or tubes are used, which can easily be cut and molded. One of the advantages of the visor on the aluminum frame - the optional primer and protective paint. The relative disadvantage of this material is its considerable cost.

But if you are not too worried about the cost of the material, and the design of the structure itself attracts you most - this option is the most preferable. A visor with an aluminum profile frame will look perfect on the background of any modern facade. 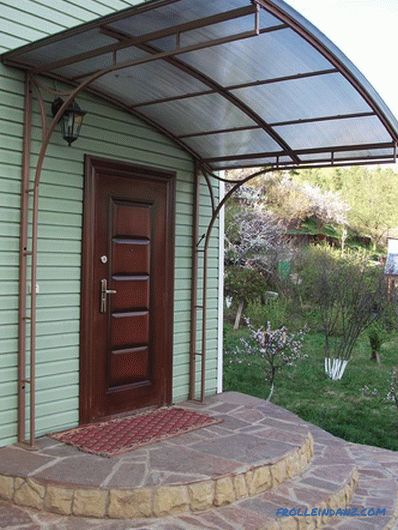 Of steel and polycarbonate

The construction of the steel profile is characterized by high strength, but it also has considerable weight and must be fastened with special care (preferably using anchor bolts).In addition, the reliability of mounting such a canopy over the entrance door can be ensured through the use of threaded connections (bolt or screw).

To improve the aesthetics of perception of the whole structure as a whole, all joints are best done by electric welding, and then carefully ground them with a grinder. 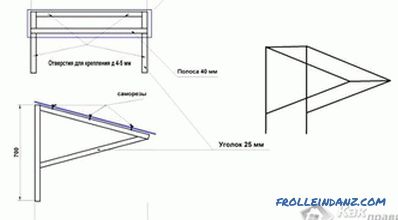 Upon completion of the grinding work, the frame must be carefully primed and painted over with high-quality paint (preferably in two layers). The fastening of the blanks of cellular polycarbonate to the steel profile is carried out by means of self-tapping screws with the use of special gaskets and plugs blocking the access of moisture to the frame.

Features of the arrangement of a canopy . All the necessary operations are performed in this case, taking into account the following installation features: 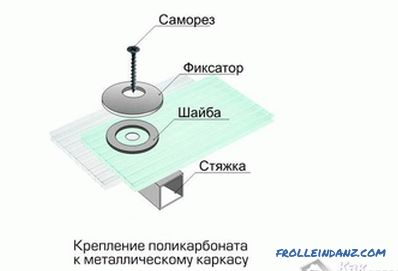 Fastening the polycarbonate to the metal frame

In conclusion, we note again that for fixing Polycarbonate blanks on the frame should be used roofing screws of the required length with an elastic gasket and a special washer.

With the availability of equipment, you can make your own forged visor with polycarbonate, as in this video. Visual production instructions here:

You can make a single-sided visor with vertical supports: 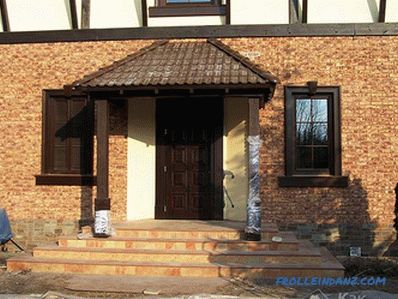 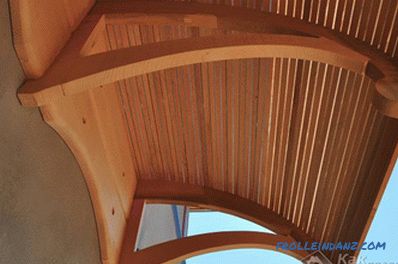 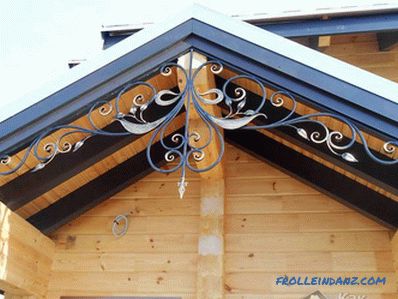 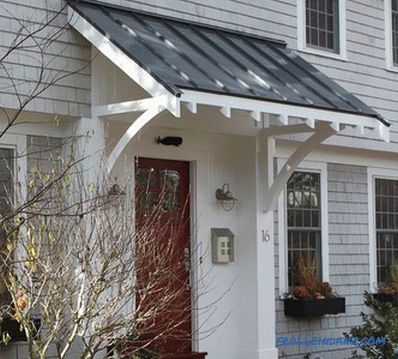 Wooden lean-to peak over the entrance 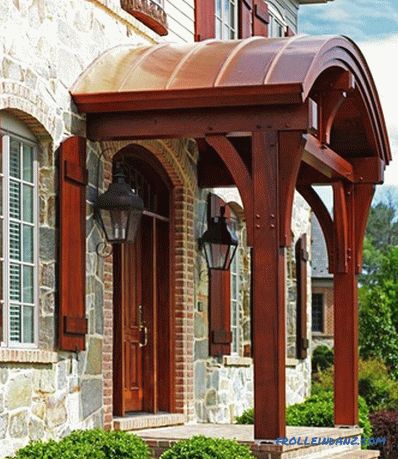 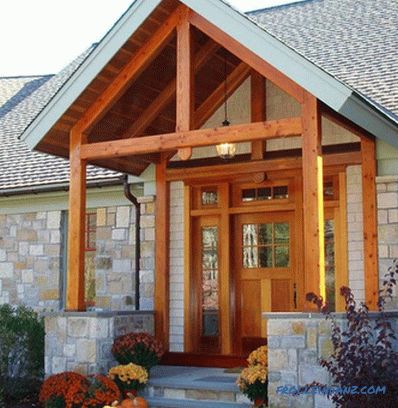 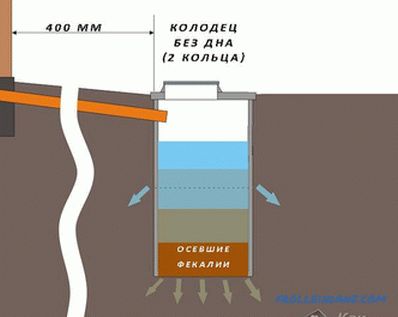 It is well known that a septic tank is considered the most successful and practical option for a sewage treatment plant that is part of the autonomous sewage system of a country farm. But before cho...

How to make a vacuum pump - making a vacuum type pump 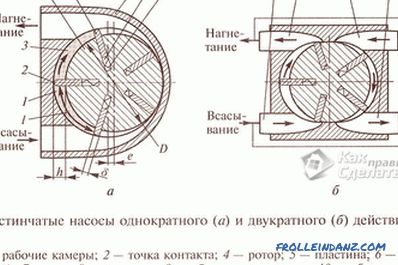 Vacuum pumps appeared a long time ago and were previously used exclusively for industrial purposes. Now they have found application in everyday life. With the help of these devices it is possible to... 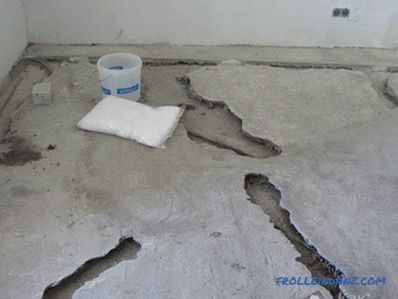 There is a lot of flooring on sale. You can arrange the floor in an apartment or house using ceramic tiles, linoleum, parquet or carpet. But among all the materials there is one that deservedly enjo...

What is better well or well for home or garden 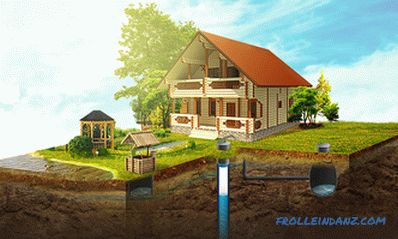 Water supply is an indispensable component of human life. Without it, comfortable living in the house is impossible. Water is used in household and household needs. It is necessary for drinking and...

installation and finishing (photo and video) 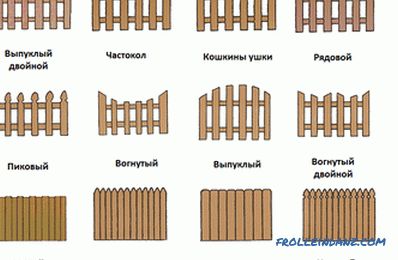 To protect the site from intrusion, wind and noise, for the demarcation of the territory, fences of various designs and qualities are used. For many centuries, wooden fences, which can take on diff...