Heaters using infrared radiation are becoming more popular every year. It is convenient and safe to use them, and besides, it is also economical. Is this so, let's try to figure it out. And consider in detail the infrared heaters, the benefits and harms of which are not so well covered in the press and the Internet. 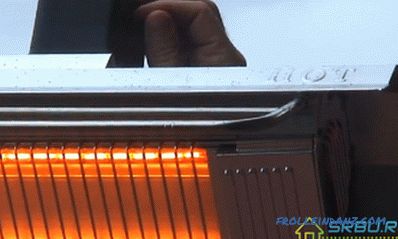 Infrared radiation - what is it?

Conclusions about the harmfulness of this radiation can only be made if you understand what it is. In principle, any heater radiates infrared rays, but the wavelength, as well as the intensity, they have different. Therefore, it would be wrong to compare the IR radiation of a conventional cast iron battery and an infrared heater.

Infrared radiation refers to electromagnetic radiation. Its natural source is the sun. It is pleasant to feel the touch of warm sunshine on the skin, but to be under their influence for too long can be harmful. In principle, the negative and positive impact of this radiation is determined by the degree of its penetration deep into the skin.

One of the main advantages of infrared heaters is that they transmit energy at their destination with virtually no losses. The surface of objects exposed to IR radiation is heated the stronger, the higher the temperature of the heater itself. Indeed, as the spectrum heats up, more and more short waves appear. Namely, they most of all heat the surfaces that are addressed to them. And if, during operation, the heater mainly performs only short-wave radiation, then it is necessary to speak not about the benefits, but only about the dangers of infrared heaters.

Depending on the wavelength and the temperature to which the heating element heats, infrared heaters are divided into three types:

Depending on the degree of penetration into the depth of human skin, the whole range of the spectrum of infrared waves can be divided into three parts:

The radiation of the heating element consists of short, long and medium waves. Just some of them are larger in the spectrum, and others less. The higher the heating temperature, the more short waves appear in this spectrum. But not all manufacturers of infrared heaters talk about it. Here, for example, the dependence of the wavelength on the temperature of the heating element given by one of the honest manufacturers of infrared heaters.

From this it becomes clear that our body can calmly perceive heat waves with a length of more than 9.6 microns. Looking at the passport of the heater, issued by a reliable company, you can find in it a range of radiated waves. Typically, it ranges from either 2 (or 3) to 10 microns.

The main advantage of IR heaters - instantaneous transfer of energy - is due precisely to the influence of short and medium waves. The more heated the emitter, the more short waves appear in the spectrum. As a result, the surface to be heated will become warm much faster than using, for example, a convector-type heater, which should heat all the air in the room. 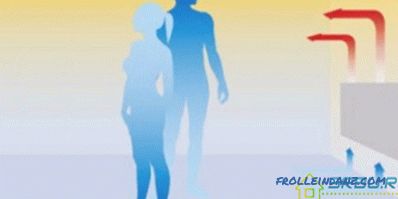 Principle of operation of a convector heater.

If you had a fireplace or an electric reflector, then you know that it is warm to sit next to them, but you need to move close enough to the device. And the heat from them is only in one direction. It is like sitting by the fire. Zazevavshis, and you can overheat, received from the infrared heaters harm instead of benefit. Therefore, manufacturers of these devices are trying to mitigate radiation.

The emissivity, also called the degree of blackness, determines its intensity. If you heat a completely black object, the radiation from it will be the hardest. The intensity of the rays from an element located in a ceramic body is somewhat reduced. Soften the radiation and reflectors mounted in the device.

So: on the basis of the effects of the rays of the infrared spectrum, it is possible to make an excellent device that will not have a negative impact on the human body and is very mediocre.

What is harmful in infrared heaters

1. IR radiation, acting on our skin for a long time, dries it. Moisture evaporates from the skin, it heats up very quickly (and only its upper layer), and sweat does not have time to form. Therefore, on the side of the body that faces the heater, and a burn may occur. This can happen if the device is installed in the room.

2. Studies that examine the effect of infrared rays on humans have been conducted for quite some time. For therapeutic purposes, this radiation is used in physiotherapeutic procedures, limited in time. But production, in which such radiation is present constantly, is considered to be harmful.

Skin that is not protected by clothing may be subject to internal changes if exposed to strong infrared rays. The proteins begin the process of denaturation, the cell membranes lose their permeability, as a result of which changes occur in the blood cells. The retina of the eyes and the lens can be burned, and then there will be a risk of cataracts. Remembering the health risks of infrared heaters, one should adhere to certain standards when using them.

3. If in the room I fix the infrared heater on the ceiling, and it is low enough, then it will constantly heat the scalp. Therefore, if you really want to buy a ceiling heater, hang it higher. And direct it in such a way as not to be constantly under its rays. And in the room for sleeping or in the nursery, you should not use such devices at all. 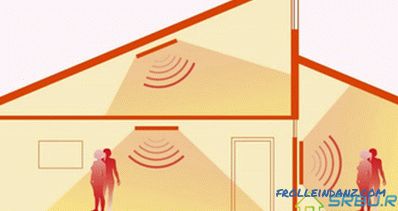 If you can't do without it, then choose a low-power device, and direct the radiating side to the walls, floor or furniture.

Is there any benefit from infrared rays

A medical procedure such as "warming up" is based on the ability of an organism to respond to a certain length of IR waves. It is used to restore and maintain the body in good shape. It should be borne in mind that you can not be exposed to short infrared waves for a long time - this is harmful.

If we talk about long infrared waves, we can only note their benefits. They not only have a very positive effect on the work of the human body, but also are capable of increasing immunity. But there is absolutely no harm from them. When buying an infrared heater, it is imperative to familiarize yourself with its technical data; article: How to choose infrared heaters - the principle of operation, the device and important selection criteria - will help you to make a proper choice of an infrared heater. 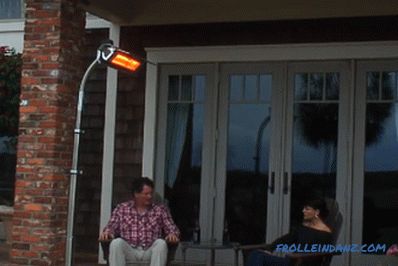 It can be concluded that the efficiency of infrared heaters is really high. They can bring considerable benefits in those places where we are not for long. This, for example, balcony, gazebo, corridor, utility room. And the heat from such a device is stored for a long time - after all, it simultaneously heats the floor, walls, and furniture.

How to hide the pipe from the hood in the kitchen

The hood cleans the air in the kitchen from fumes, smoke and odors during cooking. Therefore, without a doubt, this appliance is an important element of the modern kitchen. When purchasing a headset... 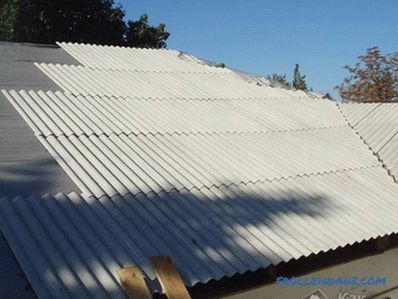 Before you start building a house, you need to decide on many questions and one of them concerns the choice of material for the roof. It is necessary to choose a coating that will protect the buildi...

Shelves in the garage with their own hands (photos, charts, video) 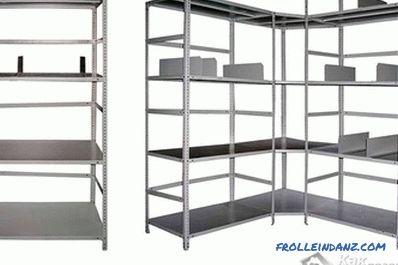 It is well known that in a modern garage building, besides the car itself, it is customary to store a large amount of special tools, auxiliary equipment and other materials. To place all of these... 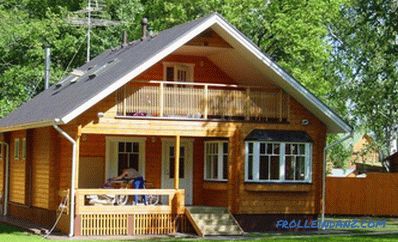 Smart home do it yourself - how to make smart home 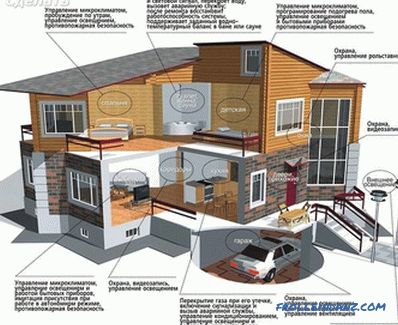 Building a smart home with your own hands can be tough for a person who does not have a special education. Of course, everything can be done much easier by buying ready-made modules of a smart home....