There is a heater that has many names, various manufacturers call it penoizol, unipole, mipora, mettemplast. However, the essence of this does not change - this heat insulator, which is a modified foam, has several advantages. So, Penoizol, the characteristics of which will be discussed further, not only copes well with the main task - thermal insulation. He is also not afraid of fire, and also does not contain any harmful components. Due to its special composition, this eco-friendly material compares favorably with traditional heat insulators. In its application it is possible to reduce the cost of construction without losing quality. 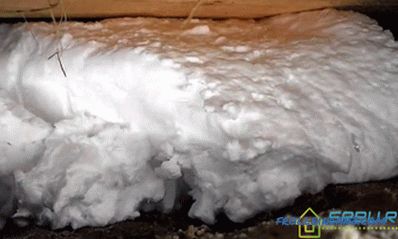 About the composition of Penoizol

This insulation is like a marshmallow or marshmallow. It is quite simple and economical to make it, since an inexpensive material is used as a raw material. If everything is done correctly, according to the recipe, then the output will be foam, but not solid, but semi-fluid. When the resulting mass dries, it turns out that it is very elastic, and all the dents from the blows on it quickly straightened. In addition, Penoizol is not afraid of moisture and stores heat for "five plus".

To prepare this heat insulator, one of the varieties of carbamide resins is taken, adding acid and a special foaming agent to it. Strictly certain parts of these components are laid in the device, which is supplied with compressed air. It allows you to get in the end a fluffy foamy mass, which immediately, until it froze, is used to fill gaps and voids. The foam that has just come out of the sleeve of the device has a white color and a jelly-like consistency. It densely fills all air gaps, does not burn and perfectly warms a design. 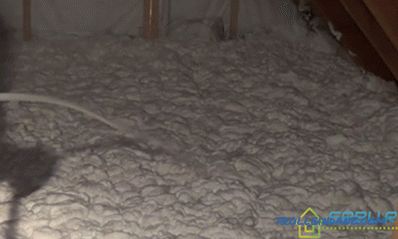 Filling of penoizole on the attic surface.

Fresh foam hardens immediately. At first, 10 or 15 minutes after it was made, it only sets slightly. After 3 or 4 hours, the foam becomes hard, but still not very strong. It gains strength after a couple of days (sometimes you have to wait 3 days). During this time, Penoizol finally dries out, acquiring all of its wonderful properties in full. The quality of thermal insulation is excellent, and the costs are quite small. By the way, compared with other materials, the speed of installation of insulation increases 4 or 5 times. And the possibility of using lightweight structures promises Penoizol promising future.

Worldwide, this material is widely used today, and consumers appreciate the properties of Penoisol.

Details on the characteristics of

About the ability to conduct heat

The thermal conductivity of this insulation is very low - its coefficient ranges from 0.031 to 0.041 watts per meter per Kelvin. If you lay the walls with only a ten-centimeter layer of this material, the house will immediately become warmer. Due to this, heating will cost several times cheaper. So all expenses connected with warming are fully compensated for one winter. A layer of penoizol can range from 5 centimeters to one meter. What he should be, decides the owner of the house.

About resistance to fire

The flammability group of penoizol is defined as G-1, and the flammability group - B-2. This means that this material favorably differs from most polymers - it not only does not ignite, but does not even melt from fire. According to the degree of opacity, he was assigned the D-1 group, and according to the toxicity - the T-1 group. This insulation can be used in a wide range of temperatures: from minus 60 to plus 80 degrees Celsius.

Imagine this situation: the ambient temperature is such that even the metal has melted. What happens to penoizol? It's okay - it will just quietly evaporate without emitting any harmful substances. As for the smoke, when it is open, it is released 10 times less than that of expanded polystyrene (foam).

About Chemical and Biological Resistance

Very many thermal insulators are afraid of mold fungi, covering themselves in a moist environment with black bloom. But Penoizol does not take any fungus, as, indeed, other microorganisms. Mice and rats, adoring to gnaw through several passages in a heater, also do not touch penoizol. It does not react at all to organic solvents and chemically aggressive environment. So, they can safely warm attic with basements - your products will not be threatened.

Penoizol absorbs water well, but gives it away without any consequences. This is for the better it differs from mineral wool, the quality of which deteriorates after wetting and drying.And even if Penoizol is dry, he also keeps the heat well. Moreover, it absorbs no more than 1/5 of moisture, subsequently evaporating it. Therefore, where this material is used, the walls will not become damp, but a gap for ventilation must also be provided. Otherwise, fungus and mold can not be avoided.

Since penoizol is hygroscopic, the walls of the room that it warms up are given the opportunity to breathe freely. This provides a comfortable environment for people living in the house. However, for the walls themselves it is very useful - they collapse more slowly. During the day, the insulation absorbs moisture from 10.5 to 20 percent.

About the ability to pass air

Air passes through structures insulated with Penoisol. In this case, the humidity in the room is regulated by itself, without any extraneous exposure. It is very comfortable to live in such a house - with a constant inflow of fresh air, as well as an optimal ratio of heat and moisture in it.

The materials of the group of foams are very high-tech due to their special softness. Due to this, they fit well to all the irregularities of the building structure - just enough material is applied. Therefore, neither gaps nor voids are formed, and the level of insulation is “at a height”. But the strength or bending of penofol is very weak and breaks down with a little effort. And now we list the technical characteristics of penoizol strength. So, if we apply to it a linear ten percent deformation, then the compressive strength will lie in the range from 0.07 to 0.5 kilogram per square centimeter. When bending, this figure will be from 0.1 to 0.25, and when stretched, from 0.05 to 0.08 kilograms per square centimeter.

Through experiments, during which the durability of Penoisol was investigated, it was possible to establish that a heater inscribed on a vertical-type structure can last from 30 to 50 years. This is confirmed by the data obtained by analyzing the use of similar polymers in construction.

Table of values ​​of technical characteristics of penoizol

About the drawbacks of penoizol

Naturally, not a single building material can consist of one plus. And buyers are wondering where the trick could be. So, this substance, poured into the cracks and openings, does not increase its volume. On the contrary - its shrinkage is from 0.1 to 5 percent. But only if everything is done correctly. And if the master's hands do not grow from that place, then he can use poor quality raw materials, and the installation is not the most perfect. 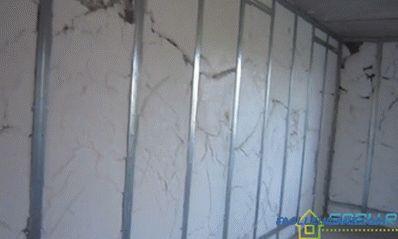 In this photo you can see the result of the work of the hackers.

There are reviews indicating that Penoizol smells unpleasant during drying, releasing toxic substances. This can happen only when a cheap carbamide resin is used, which should not be used. Unfair contractors can save both on raw materials and using an outdated plant for the production of material. Such a cheap model is not capable of injection molding. So remember: if penoizol smells unpleasant and strong, then you are simply deceived.

And about the harmfulness of say the following: during the polymerization of the material, a certain amount of gases with a certain odor is released. This is formaldehyde. Naturally, they can hardly be called useful. But after all many paints and varnish coatings smell much stronger and more unpleasant. And penoizol, as soon as it dries completely, stops to smell any kind. By the way, manufacturers assure that the formaldehyde released by the material has an extremely low concentration. Hygienic certificate confirms this. However, the choice is yours - you can take a natural heat insulator, if in doubt.

So, we can conclude that the main disadvantage of this insulation is the pursuit of profit by unscrupulous manufacturers who take raw materials worse and cheaper, but do not follow the technology. And pay for it to us with you. Sometimes, firms claiming that they have been successfully producing penoizol for a long time are also producing marriage. So look at both! 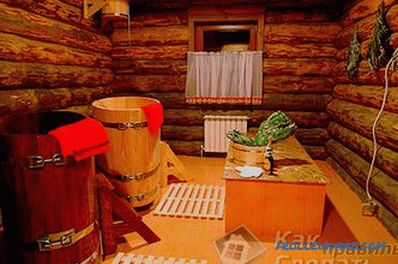 Baths in Russia were built from time immemorial. It is known that when the chronicler Nestor began his work, these structures were already very popular. Many Europeans tried to adopt the tradition o...

The better to paint a wooden house outside 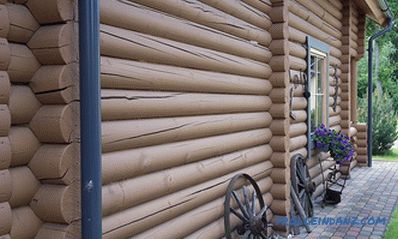 The wooden house needs exterior trim. This statement will be approved by every professional builder and owner of a wooden house. In addition to decorative functions, the decoration also performs pro...

What is the slope of the sewer pipe should be

When designing and installing a sewer system, it is necessary to know about the correct inclination of the sewer pipe. The system is gravity, drains move through the pipes under the influence of gra... 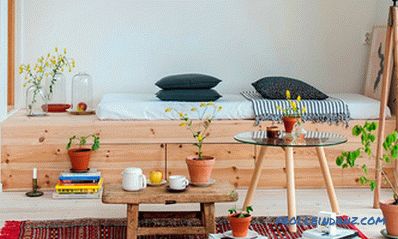 The modest charm of the Scandinavian style attracts us all instantly. In the classic Scandinavian interior, functionality is valued above aesthetics, and the color palette is modest. In fact, minima... 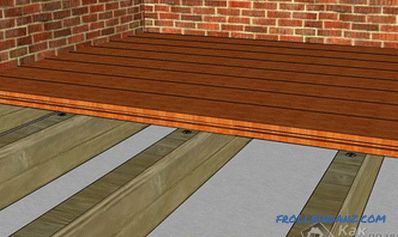 A garage can be either a separate independent structure, or it can be attached to or built into a building. Regardless of the size and shape of the building, everything inside should be properly equ...